By Timps on Wednesday, January 6, 2016 in Social Media

It’s a fairly standard term for social networks/content sharing sites. You hand over rights to the site when you enter text, upload an image etc.

They’re all specific about not taking your copyright. Facebook, Twitter, WordPress, Instagram are all explicit that your content is yours, you are just granting a global, irrevocable license for them to use it. Forums do this, Spotify does it. your mobile carrier does it. All stated almost the same way.

Most of it makes sense from a legal point of view. Replicating things across CDN networks, resizing images for desktop, mobile and tablet views, email subscriptions, RSS feeds… the list goes on. There’s a lot of reasons to legally grant a license to your content in order for their service to function. 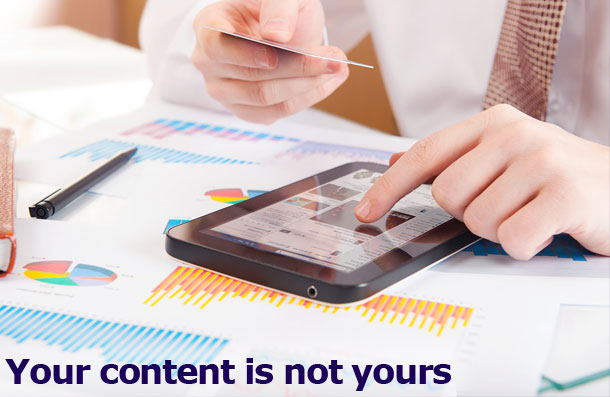 So why do you need to grant the license?

In most of the world, copyright exists at the point of creation. It’s automatic. Australia, the US, the UK are all pretty much identical in this regard. The moment you press the camera shutter, press keys or put pen to paper it’s legally yours and you are protected.

So to get around any legal hiccups, you need to give them a license so they can show it to people as they use the site or service.

And it’s always come with a major caveat. When questioned, complained at or queried the PR people, CEO’s, founders have always been clear that the license is just for using the site. No one is out to steal anything.

But this has always been a ‘gentleman’s agreement’, legally the content HAS been licensed to them. To do with as they please, in perpetuity.

The agreement is over

The first major shift away from this has happened, with Reddit. A book has been published containing posts and comments from users. A book available for sale on Amazon right now. (non affiliate link here.)

The book is made up entirely of content found on Reddit in IAMA posts. And it’s not just a list of celebrity who’s who. There’s posts from professionals and others who drew in attention. A congress staff member, Nazi prison camp survivor, in amongst Buzz Aldrin and a young man with two penises.

Under the terms of the user agreement, Reddit (and by extension Conde Nast) owns the rights to do what they like with the content. But what does this mean for the original authors? Is there a valid legal recourse, or is this the literal first step down a dark path.

Many Reddit users applaud and celebrate the publishing of their work. The thrill of seeing their name in lights is more than enough recognition. In fact, some of the commenters and authors will be buying copies of the book just because they appear in it.

But where is the line drawn?

The issue arose for the first time a few years ago, when news broke that James Erwin had sold the exclusive movie rights to a short story he posted on Reddit. Techdirt and THR both speculated on whether or not James could legally sell ‘exclusive’ rights. After all, Reddit already owned the rights to the story and could do with them as they pleased.

‘Jerry Birenz – listed as the copyright agent for Reddit in 2011 said that this raises an “interesting issue” and that by a strict reading of the user agreement, multiple parties might be able to make a claim to a license if they chose to develop Erwin’s story.’ – Quoted from THR.

The question here isn’t one about monetary compensation. Reddit may be sharing revenue with the authors. But with the number of commenters on each IAMA post, each with their own copyright claim that seems unlikely.

The question is, where will this stop?
Now that the flood gates have been opened, where else will content submitted to Reddit be used? Does this create a legal precedent for other social networks to follow?

It’s well worth remembering that the ‘gentlemans agreement’ on content licensing has been broken. A large corporation is perfectly willing to profit directly from the content submitted to their site. Including in another form.

On top of the Richard Prince – Instagram debacle, it demonstrates well that copyright law isn’t clear to the average person. And most social network users are ill equipped to make an informed decision on these questions.