#FacebookDown – a big joke. With a hint of something scarier. 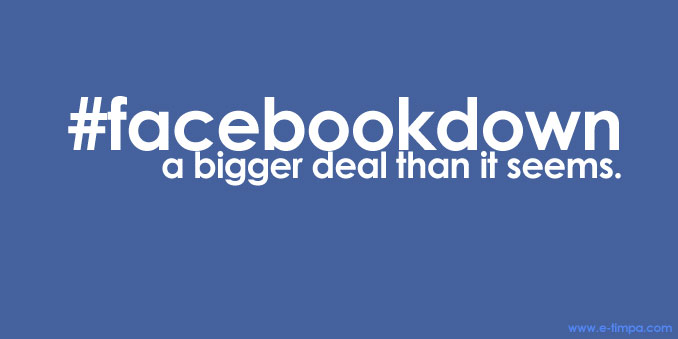 Twitter quickly filled with comedy and questions. There were thousands of people posting to ask “Is Facebook down?”

Then it quickly spawned new memes and comedy.

And then people took it in stride.  Some people didn’t care. Other people were mad.
Plenty of negativity from people who were obviously well above using Facebook.

Plenty of brands jumped on board. Showcasing the benefits of moving fast in social.
Surprisingly nothing from the guys at @Oreo who normally move fast to get content out.

Life is full of ups and downs. We’re more than glad to see you back up! #ShareaCokeET #facebookdown pic.twitter.com/IJgSkfiLTn

But apart from the comedy and the outrage, what does it mean for business?

The Facebook outage today highlights one of the issues with third party platforms. Technical issues can arise beyond your control.
But far more than that, is the complete lack of visibility of the cause, and expected resolution for the issue.
Will the service be back online in 15 minutes? 30?
If you’ve got a team responding and engaging on Facebook what happens in the meantime? Fallback processes need to be in place.

SLA is a major concern for many customer service roles. How quickly does your team reply to and close off interactions in the social space?
Are your CRM and ingestion tools designed to account for downtime? Or are timestamps taken from the time of content posting. Depending on when the outage spread across Facebooks data centres was there a delay of 5, 10, 15 or even 30 minutes that customers could see your page and you couldn’t? And once you can, did the timer start when the post arrived? Teams consistently hitting response times under 30 minutes will breach their averages for days.

Redundancy? How do your response tools deal with a complete lack of response from Facebooks servers? Did your posts and responses queue and deliver as expected? Did they fail entirely?
Are you using a third party tool that doesn’t deliver an on screen confirmation of success?
Many social media teams respond using tools from Lithium, Salesforce, Radian6, Tweetdeck, etc and wouldn’t even see the native Facebook interface. This could leave them completely blind to the issue and unaware that their responses aren’t making it out into the world.

Facebook is an amazing place to engage with your fans, and to provide service. It’s fast and simple for people to get in touch with you via a Facebook page. After all they were there already.

But today helps to highlight a reminder for us all, that we’re only guests on Facebook. We have limited visibility, restricted access and even when running a page with tens of thousands of followers get no more preferential treatment than any other member.

Today is a good day to make sure your teams are prepared to deal with these posts from customers:

In the end, why not join in with the hundreds of brands and pages celebrating Facebook being back online. No one will get sick of the apocalypse jokes anytime soon. Right?

A social Xmas post or not… How to decide if it’s right for your brand?
50 Shades of failure? Only to the cynics of #AskELJames